What I am reading now

Diego junior coming back to Quarto 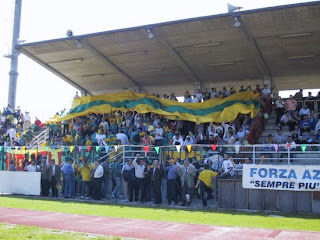 Diego jr. did not make up his mind: after one week in Caivanese (left, the stadium), he decided to come back and play once more for Quarto, in the same division. This is 2 years after he helped the team to get promoted to the fifth series in the small city in the Naples area.
Reasons for the change are not entirely clear: maybe the fact that Caivanese was last in the ranking, possibly the lack of challenges within his former team, maybe the good relationship with Quarto's president and his good memory of the past.
The crude reality is however that Maradona junior has not yet found his true dimension.

PS: as an aside, it appears from the Italian press that the transfer from Caivanese to Quarto did not take correctly place from a procedural standpoint. This means that Diego jr. will not play until June 2009 in official games.
Posted by Massi at 2:35 AM

The Economist: Computing and software